Bottom Line: I received two samples for testing from Vapcell. They were a bit dinged up but performed well. I was told that they will not be generally available for several months, perhaps the end of the year. I do not know who has them in stock now or when they will.

I am testing them now because of the large number of requests I received and to let vendors know how they perform. I will retest these when full production quantities are available as Sony might make small changes to the cell’s performance before then.

The two VTC4A’s I tested outperformed the VTC4. At a 10A and 20A discharge the VTC4A hit harder than the VTC4, performing even better at the higher discharge current level. I will do higher current discharge testing and comparisons when I am able to get full production versions of these cells. This is a great cell though.

For a 25A continuous discharge the VTC4A runs at about the same temperature as the VTC4 does at 20A. Sony will probably rate the VTC4A at about 5A higher than the VTC4. This could mean a continuous current rating of 30A or higher for the VTC4A, perhaps with temperature-limited operation at some point above that.

My preliminary estimate for the VTC4A’s current rating is 25A though, up to 30A if the temperature is kept below 80°C. This can change at any time as I learn more about this cell.

Why don’t I rate it higher? Sony seems to trade off cycle life for performance when setting its ratings. That is, Sony gives the VTC series of batteries high continuous current ratings but that results in high operating temperatures and fewer cycles before they start losing capacity and performance. Until I can do some cycle life testing of production versions of these cells I am setting the ratings mentioned above. These ratings should result in about the same cycle life as cells from Samsung, LG, and Panasonic/Sanyo.

The VTC4A’s I tested delivered 1988mAh and 2002mAh at 0.5A. The capacity might change a bit before the cells are available in full production quantities but I am estimating the VTC4A’s rating at 1900mAh minimum and 2000mAh typical. If the cells I received were not A Grade then the capacity ratings from Sony could be higher, e.g., 2100mAh typical.

I have requested a copy of the datasheet but no one has it yet.

Two cells were donated for the purposes of testing by Vapcell (www.vapcelltech). Thank you!

These tests only note the estimated ratings for these batteries at the time I tested them. Any battery that is not a genuine Samsung, Sony, LG, Panasonic, or Sanyo can change at any time! This is one of the hazards of using “rewrapped” batteries or batteries from other manufacturers so carefully research any battery you are considering using before purchasing.

Misusing or mishandling lithium-ion batteries can pose a SERIOUS RISK of personal injury or property damage. They are not meant to be used outside of a protected battery pack. Never exceed the battery’s continuous current rating and keep the plastic wrap and top insulating ring in perfect condition.

Any rating in the tables can change at any time as different grade cells appear on the market or we get swamped with fakes. Please, never assume that the ratings in the table are permanent and will never change! Always download the latest version before considering any cell purchase. 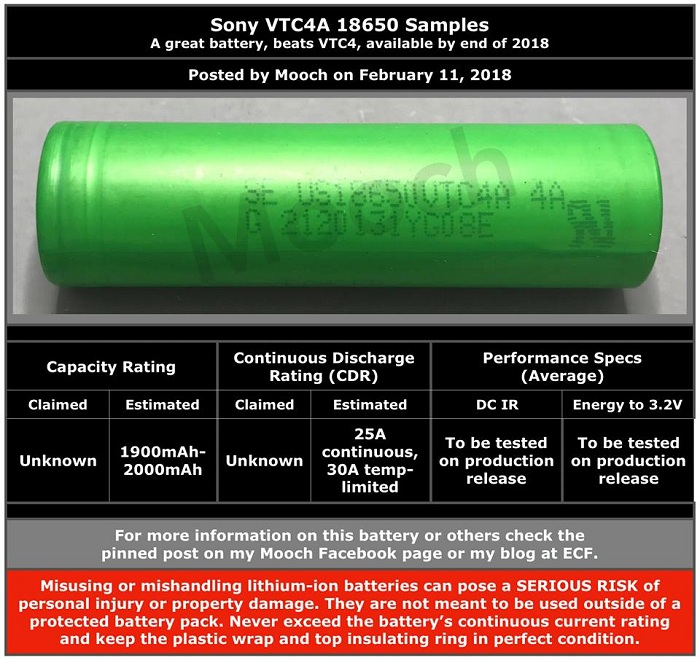 I would like to personally welcome Battery Mooch to MoochReviews.com

“Mooch” is well known in the industry as the “battery guy” and is quite popular on the ECF.
Although I have some experience with battery testing, Mooch has all the experience I lack so I though it a good fit to offer him another place in internet to publish his articles.

Who is Battery Mooch?

My name is John Muchow, some of you may know me as Mooch on ECF and FB and Mooch315 on ECR.

I have been vaping since April, 2015 and haven’t smoked once since I
started!

I was born and raised in New York City and still live there now. Since 1992 I have been designing and building electronic devices for a large number of clients. My first products were camera remote-control systems for sports photographers. As these systems, and other devices, transitioned from wired to wireless the performance of the batteries they used was very important as there was no way to replace them during use. This led to me doing more and more battery testing and developing the electronics to charge, test, and protect them.
As battery technology advanced, from NiCd to NiMH to Li-Ion and now
ultracapacitor/Li-Ion hybrids, the devices I built and the battery testing I did
advanced along with them. I started specializing in power management electronics; battery chargers, energy harvesters (for charging from heat, light, or vibration/movement), power supplies, battery analyzers, electronic loads for battery discharging, and battery management/protection systems. This is the work I still do today.

My clients have included the US Army, National Geographic, Sports Illustrated,
Eastman Kodak Company, and hundreds of other companies from large to small. Part of the work I’ve done for a lot of my clients has been battery testing. Sometimes they want to recommend a good battery to their customers. Other times they’re batteries I have chosen to combine with my electronics to form a complete, protected power source for them to incorporate into their products.
Depending on my client’s requirements this testing can take up to several weeks to complete. I use a subset of these tests when evaluating the batteries we use when vaping. This includes continuous-current tests to establish the battery’s true (and safe) ratings. They also help to determine if there’s any risk of venting if one of our mods autofires or a mechanical mod’s button is accidentally pressed. The pulse-current tests measure the degree of voltage sag we would see when vaping at different current levels. Both types of tests are done the same way for every set of batteries I test.
This consistency in the testing allows for direct comparison of the performance of different batteries even if the pulse discharging I do doesn’t match the way you vape.
Safety is my number one priority. While I often test at discharge current levels
that can result in unsafe battery temperatures, this is the only way to figure out what a battery’s true and safe ratings are. No battery is totally safe but we can certainly avoid taking unnecessary risks.

My blog at ECF has the results of all my testing and a few articles on batteries,
battery safety, etc.:

I have also listed the equipment I use and the steps I follow when testing. This
allows anyone to replicate my tests if they want to:

My battery test results offer you a resource you can use when choosing a battery
that will not only be safer for the way you vape but will also give you great
performance.

By continuing to use the site, you agree to the use of cookies. more information